It's been a long time since I've found a bra that I can truly say I'm happy enough with to replace my faithful Freya Decos but when Curvy Kate released photos of their new moulded bra last year, I felt things might just change.


When the Smoothie bra was released as part of Curvy Kate's AW12 range it was speculated that this new basic would be a rival for the firm favourite Freya Deco moulded plunge bra, which I'll be reviewing later this week hopefully.

The Smoothie is made from a lovely smooth black stretch fabric with a subtle leopard pattern, which can't be seen in my photo. It is lightly moulded and has fully adjustable straps and is the most true to size back in Curvy Kate's padded bras I've tried so far. The central gore sits higher than that of the Freya Deco which is good if you have soft, bottom heavy breasts that tend to fall out of the middle of plunge bras. 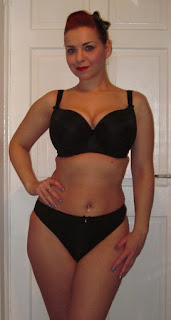 I've had my 28H Smoothie since November and the only real issue I have with it is that it comes up a touch high under the arms. The wires are just a tiny bit too long and this can cause a bit of discomfort towards the end of the day. The band is a little on the large side, but as I said before, it's probably the best so far from Curvy Kate, other than the Fleurty. The thong is a size 16 and is  perfect fit.

Although the Smoothie doesn't quite give the epic cleavage that the Deco offers, it's overall a better fit. I will certainly be buying the Smoothie in each and every colour it's released in as it's such a good staple bra.The next colours to feature in the SS13 range are Hot Pink and Blush, as seen below (photos courtesy of the Curvy Kate blog) 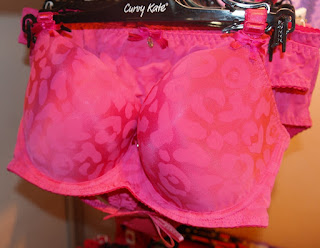 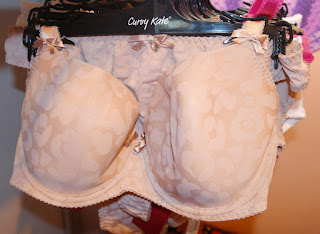