The Ahh Bra...The Marmite of bras?

*Firstly, I'd like to say that I was sent the following items to review by the company in question. I blog honestly and will not lie about a product just because it was sent free of charge.*

We've all seen those late night shopping channels advertising miracle products that you simply can't live without, right? Sometimes they can grab your attention...

Like I said in the title, to me the Ahh Bra (affectionately know as the Argh Bra by some bloggers!) is like Marmite; you either love it or hate it. I'm a firm believer in the need for wires, hooks, straps and a solid band to support the breasts, so I'm in the 'hate it' camp. So when a representative of Rhonda Shear contacted me to see if if I'd like to review the Ahh Bra, I was reluctant but in the interests of my blog, thought it would be an ideal product to try.

Rhonda Shear, the designer of the Ahh Bra is undoubtedly a passionate and inspirational businesswoman, having won numerous entrepreneurial awards since the launch of the Ahh Bra 2002. Rhonda was an all-American beauty pageant kind of girl, later posing for Playboy, then moving onto TV, movies and stand-up comedy. Wanting a new project, Rhonda decided to embark upon designing a revolutionary new bra; and the Ahh Bra was born! Rhonda's range has since expanded to include nightwear, outerwear such as leggings and secret support vests, dresses and shapewear, which I was hoping I'd get to try out. 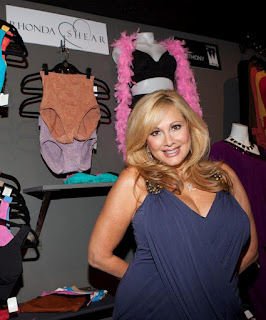 The ever glamorous Rhonda Shear (photo courtesy of Up All Night)

The Ahh Bra has no hooks, wires or adjustable straps and comes in sizes XS-2XL without the 'need' for cup sizes. It's supposedly guaranteed to fit perfectly. We'll see about that...! 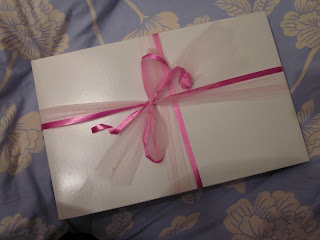 Beautifully presented. But never judge a book by it's cover...

I was sent four items from Rhonda's 2012 collection; the original Ahh Bra, an Ahh Bra with removable pads, the 'Sweet Tart' butterknit gown and the 'Pin Up' bra. 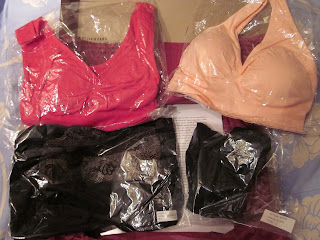 The Original Ahh Bra:
I received this in the Raspberry colour, in a size medium, based on my overbust measurement of 36" (I think). The underbust measurement isn't taken into account therefore I found it a little loose in the band.. The other major problem is that the straps aren't adjustable, and needed to be about 4 inches shorter. You can see in the picture below how the fit of the Ahh Bra is improved simply by shortening the straps, which also encased the 'armpit boobs' I was experiencing, an issue the Ahh Bra boasts to eliminate. Even then it's not something I'd be comfortable wearing outside the house.

I can't argue that the construction of the Ahh Bra isn't well designed, with it's tight knit in place of traditional wires, and looser knit to accommodate the bust. This is not an exclusive design though, as there are other bras on the market that sport a similar construction.

The Original Ahh Bra is unsuitable or use as a functional  bra in my opinion, as it does not support the bust in a way that a wired and adjustable bra can. I'd only suggest the Ahh Bra to be worn as a sleep bra or for slobbing out on the sofa. 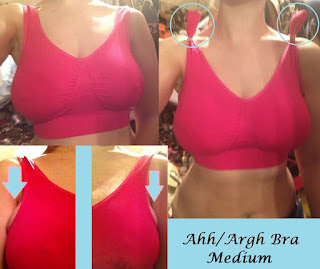 The Ahh Generation Bra (with removable pads):
This one is virtually the same (looks and fit) as the Original Ahh Bra, except it has removable pads and is in the Blush colour. The fit in this one was...interesting, the pads far too small for my GG cups. However much I tried, I couldn't get my boobs NOT to look wonky, so I don't really have much to say on this one that I haven't said already. Er....enjoy? 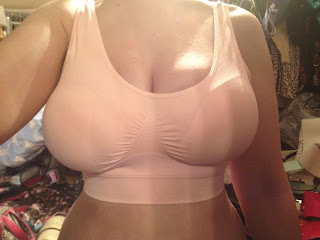 The Pin-Up lace metallic leisure bra:
I so badly wanted this to work as I hadn't had much luck with the first two. But the only positive thing I can find to say about this non-wired, soft cup bra is that it has LOADS of hooks and eyes, see? I wish other bra makers would follow suit, although they were quite fiddly to fasten, so maybe not. 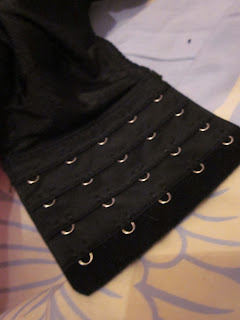 This bra was a Small yet the band stretched right up to 40". Yes, the fabric is that stretchy. Bearing in mind my underbust measurement is 28", you can see why this particular style doesn't work for me. Again, the straps were far too long and coupled with the very loose band, the bra offered no support whatsoever. Yes, that's my natural shape in the first picture. Also, check out the HUGE arm holes! 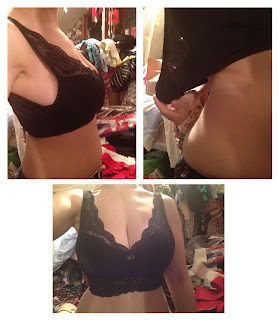 The Sweet Tart butterknit shelf gown:
Possibly the most disappointing of them all. I was hoping to at least salvage this to sleep in, and on unwrapping it, it was instantly my favourite of the package. The nylon/spandex mix is beautifully soft and stretchy, and the black lace over nude is a nice touch. Although the straps are adjustable, I didn't find this helped at all, since they are very thin and flimsy, completely unsuitable for supporting GG cup boobs!

Again, this is a small and again the band was extremely stretchy, offering no support, so my boobs sit as though I'm not wearing a bra at all. I think the pictures speak for themselves:

All in all, I wouldn't recommend any of the products I've reviewed if you have a fuller bust. They might work okay for a woman with a smaller bust than myself I guess, but since you're reading fuller bust blog, then I can't say I'd be able to guess. Apparently, the Ahh Bra is hugely popular and has sold millions of units, so I guess a lot of women have had success with them. What works for one might not work for another, so who am I to argue?!

Have you tried an Ahh Bra? What did you think?
Posted by kel_kitty at 17:35