A month or so ago the new Bravissimo catalogue dropped through my letter box. Included with it was a supplementary sale leaflet and to my joy, a few of the bras I'd been eyeing up last season were in there! I immediately got on my iPad and filled my put my order through.

First up, the Tanzania Stripe by Bravissimo, currently £24 for the bra and £12.50 for the shorts. With it's striking teal/iris zebra stripe design, it immediately appealed to my love of animal prints. I was disappointed to find that it's unpadded, which is completely my own fault as I just assumed it was by the look of it. So instantly this was going back, but not before me trying it on for size of course. Before I ordered I carefully read the reviews and chose a size 28H on recommendation that this bra runs slightly small in the cup. The first thing I noticed was that this bra was REALLY tight in the band. So much so that I could only just fasten it! The wires appeared to have been made for a much larger band and ended up virtually touching my shoulder blades at the back! The cup was slightly too small so if I were to order this again I'd go for a 30H for both those reasons. The shorts I'd rad, came up small so I ordered a medium and a large, with the large being the best fit. It's a really supportive bra and I wouldn't have thought twice about reordering if I were a fan of unpadded bras. 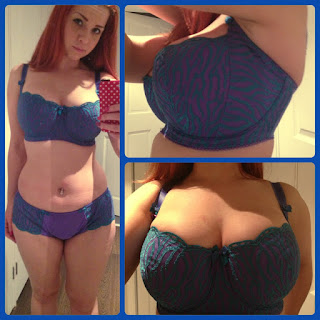 Secondly I tried Bravissimo's Rococo Charm bra, now at £21 which again is an unpadded half cup, and again, sent back because I thought it was padded! The design of the bra is really beautiful, and the colour, a soft peach is so pretty! Although the shape is supposedly the same as the Tanzania Stripe, I found that the fit was quite different. This is a 28H, the same as the Tanzania Stripe, but the Rococo Charm fits much better. In fact, I'd call it a perfect fit. The wires didn't go back as far and the back wasn't quite as tight. If this were a little padded I definitely would have kept it! 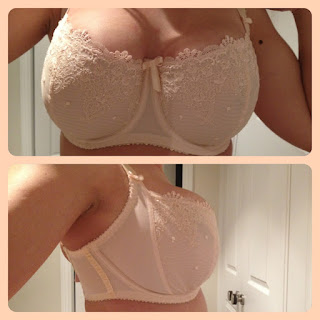 So if it's unpadded half cups you're looking for, look no further and snap them up at Bravissimo before they're gone!