Totally forgot to thank you all for voting for me in Brastop's Cover Girl competition. I won!

If you're a Brastop customer, you have probably already received your copy of their magazine with me on the front and an exclusive interview inside! Eek! Exciting stuff! If you're not a customer, you can read the magazine online here, but (at the time of writing this), 'my' issue is not online to view yet.

So here's what the finished product looks like, along with the postcard that was sent out to customers for my Model Of The Month win back in January. 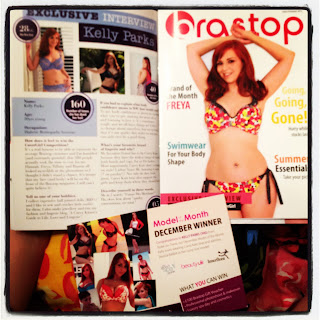 Thanks again, I wouldn't have won without your support :) 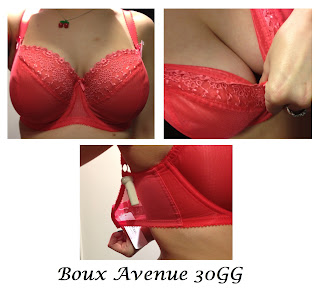 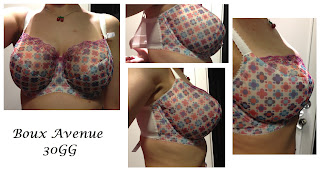 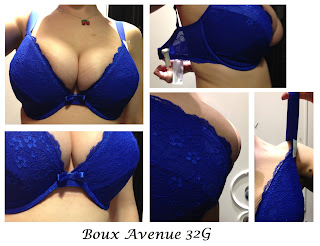 Have you had a fitting at Boux Avenue? How did they do?
Posted by kel_kitty at 14:40 No comments:

Today I ventured into a shop I don't normally go into; New Look. I initially went in to drool over their shoes, as they're always amazing, but found myself with four dresses from Kelly Brook's new collaboration with New Look that I wanted to try on!

I'll bang through these quickly as I don't want to bore you!

Dress number one, the Orange Poppy Peplum Dress, £39.99. I tried this in my usual size 8, and it was quite a struggle to squeeze into. I didn't hold much hope of it looking nice, or fitting my the bust, but lo and behold, it doesn't look too bad, and fits like a glove. A rather snug glove. I have a feeling the size 10 would probably be too big, particularly on my waist. The peplum seems to be a bit too long for me, and makes my butt looks even bigger than it really is! I think this is one for the less curvy women out there...Anyway, here it is; 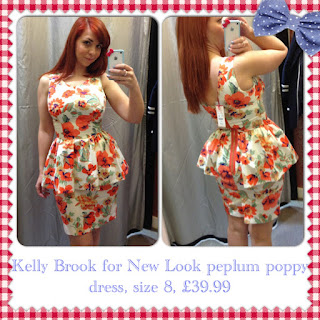 Dress number two, the Bardot Scenic Print Dress, £39.99. Again, a size 8, this time an even worse fit! You can't tell from the photo but I couldn't get this zipped up over my bust. AT ALL. It would probably be perfect in a 10, but I'm not that keen on the neckline as it means I'd have to wear a strapless bra with it, and quite frankly, strapless bras are always uncomfortable! 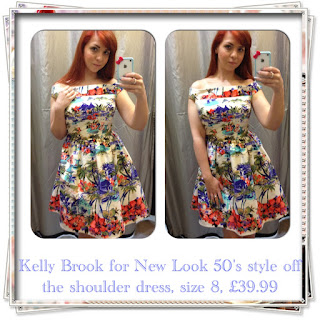 Dress number three, the Blue Belted Dress, £34.99. A size and a MASSIVE fail! It fits perfectly on the waist and zips right up, but the bust was, as expected, a terrible fit. It has cup details stitched in, so the chances of it fitting a lot of women is very slim as the 'cups' are quite small and very wide set. No hope for me and my 28GG's! I knew this dress wouldn't fit but I was curious since Kelly Brook has a sizeable rack, so I hoped for a better fit. On the plus side, the dress is a nice colour for me and my red hair, has a matching belt and a cute keyhole detail on the back. Please excuse my bra being shown so badly, it's the wrong size and rides up my back. 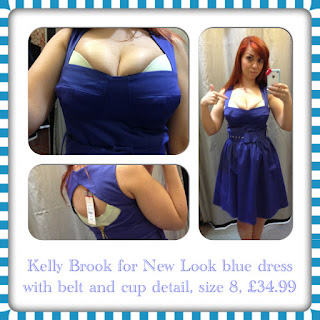 Last but not least in any sense of the word, my favourite of them all, the White Floral Bow Shoulder Dress, £39.99. This time, the size 8 fitted as though it was made for me! Perfect! Again, excuse the badly fitting bra. If I wore my real size it wouldn't be seen. I love the bow details on the shoulders and the keyhole in the back, it makes a difference to everything else out there at the moment. I won't be buying this dress as I have too many already, but I can highly recommend this one from the Kelly Brook range. 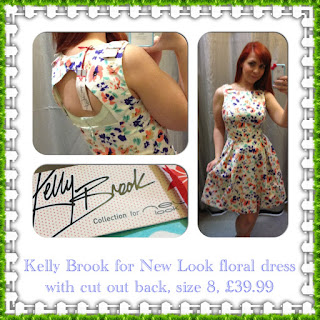 So what do you think of the Kelly Brook collection? Will you be buying anything from the range?